About the Majestic Theatre in Chillicothe, Ohio 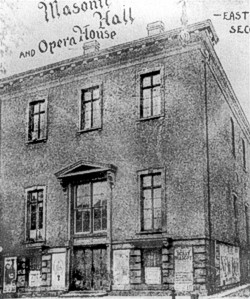 The building of the Masonic Hall on the present site of the Majestic Theatre in 1853 marked the beginning of better entertainment in the city. The two story brick building was a combination lodge room, dance hall, and theatre. Stock companies would come and stay as long as a month and put on plays. In 1876 the Masons appointed a building committee to enlarge their building. The original building was 40 ft. x 100 ft. and was extended to 50 ft. x 120 ft. The architect was John W. Cook and Isreal Beideman, the local contractor. The stage was under the supervision of Warren H. Girvin of Syracuse, N.Y. The new stage was 46.5 ft. wide with a depth of 28 ft. The proscenium arch was 31 ft. high and 26 ft. high. Below the stage were all the mechanics necessary to operate the several trap doors in the stage floor. You entered the theatre through 8 ft. high double doors.

The vestibule had a ticket booth on one side and at the other side was the stairway to the balcony and stairs continuing up to the top floor to the Masonic Lodge Rooms. Upon entering the auditorium from the vestibule you were in a horizontal aisle across the back blocked off by a screen from the seating. In front of the screen was the “Dress Circle” in a horseshoe shape. The seats were on platforms giving each adequate view of the stage. In front of the “Dress Circle” the floor had an incline of 1 inch to 1 ft. At the front of this was the orchestra pit. The balcony above was also horseshoe shaped and again the seats were on platforms, each 12 inches above the one in front of it. The row of seating behind this was the Gallery. The Masonic Opera House could seat 400 to 500 people. By removing the seats on the first floor and placing movable sections with braces, they could provide a flat floor for dancing and roller skating. Mr. E. B. Hough, a scenic artist from Syracuse, N.Y., was hired to decorate the interior. The main ceiling was handsomely frescoed and above the stage in the center was an allegorical representation of music. In each corner were representations of each of the seasons. The wall was painted gray. On the bottom level of the addition was 6 dressing rooms complete with mirrors and makeup lamps. A hall also provides a convenient entrance to and from the hotel next door and back stage. Upon completion in December 1876 it was announced that the Masonic Opera House was one of the finest Theatres in the state. After the remodeling and with the completion of the Clough Opera House across town, theatre offerings were tremendous and varied drama, comedy, farce, minstrel shows and operas were presented.

In 1904 A. R. Wolf bought the Masonic Opera House from the Masons as they were building a new Temple on Main Street. Mr. Wolf remodeled the theatre and enlarged the stage. He replaced all the windows in the front of the building with beautiful stained glass windows. The Masonic Opera House continued under Wolf’s excellent managerial abilities until he sold it to the Myers Brothers in 1915. They again made some improvements and repairs and installed a movie screen and equipment. The Myers Brothers changed the name to the Majestic Theatre. They occasionally had live theatre productions on the stage but finally went to motion pictures exclusively.

In July 1971, Harley and Evelyn Bennett became the new owners of the Majestic Theatre. They did careful restoration with reference to the original wall painting. New seating was installed as was new front doors. The restrooms were remodeled and the lobby redone. The brick wall on the alley side was sand blasted and the old broken plastic squares on the front of the building were removed and a brick facing was installed. A new coat of paint and the refurbishing of the marquee, new roof and spouting all helped to preserve the old Masonic Opera House.

Three Chillicothe businessmen, Robert Althoff, Robert Evans, and David Uhrig, bought the theatre as a non-profit organization in 1990. All new wiring throughout the theatre, fire safety, and security systems were installed.