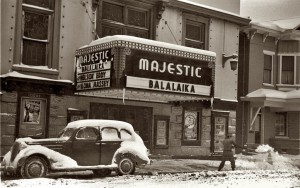 I remember my father taking me to the Majestic to see Al G. Field’s minstrels, also Abie’s Irish Rose, fresh from New York. In high school we were not allowed to see Rudolph Valentino movies on our own. I finally convinced my mother that she should take me to see “Blood and Sand.” During the picture she was very much embarrassed because I was the only teenager there.

When traveling stage shows used to perform at the majestic, they would sponsor a talent night. I loved to tap dance and would usually enter the contests. This and other times were great memories of a chance to tap dance before an audience.

When I was growing up, my family and the Earl Myers family were friends. The Myers family, Earl Myers and his brothers, owned the Majestic Theatre. I would visit them frequently and even go back stage when an entertainment was in progress. I also visited them in their home, which was back of the (Majestic) Hotel. When it was publicized that there was to be a rejuvenation of the theater, I wrote both Marietta and Bill, the only survivors of this particular family and told them about it. They wrote me and were very interested and related that the Majestic was used as a morgue during the flue epidemic during WWI. I also was in a style show at the Majestic when I was in high school. The style show was put on by Helen Vanmeter assisted by my sister, Catherine Sheets, who were dress designers and wonderful seamstresses. Mrs. Vanmeter is still living.

When I was a little girl attending elementary school in 1911 or 1912, I went to the old Jackson school in the East End. Each spring we had a May Festival, each school competing in sports and music. What a thrill that was to sing from the stage of the Opera House, as it was called at that time. That is one of my most cherished memories.

In April 1945, my husband Wayne and I went to a movie at the Majestic Theatre. I those days money wasn’t too plentiful, so we generally sat in the balcony, as it was a little cheaper. This particular evening we were a little late and light had been dimmed, as we went up the stairs I caught my foot on the step and tore the heel off my shoe. My husband said he would take it across the street to a shoe cobbler (since it was a Saturday evening and the shops were open the evening in those days.) I became tickled about the incident and couldn’t stop laughing, just then the News Reel cam on showing the funeral procession of President Franklin D. Roosevelt. Needless to say my husband didn’t see much of the movie, as he had to make a second trip to get my shoe.

My most vivid memory of the Majestic Theatre is of one evening, sometime in the late 30′s or early 40′s, when my sister and I attended a double feature horror movie at he Majestic Theatre. Although being very entertaining, it also took its troll on our minds. I did not realize how much though until after starting to walk home in the very dark of night. It was pretty chilly outside and when I put my hand into my coat pockets, I discovered I had worn out their lining, evidently by being scared, and twisting at them. You see, our grandmother stayed with Alice Myers at that time, and we thought nothing could hurt us as long as we knew the owners of the “theater,” Alice and her brothers, Early Myers and Edwin Myers. I believe that is why we were allowed to go to the movies by ourselves. In later years, my husband and I had our first date there. That was in 1950. Needless to say, I felt secure with him by my side.

On June 5, 1955, I had just finished my sophomore year at Kingston High School and was enjoying my summer vacation. There was a new movie showing at the Majestic “Battle Cry,” staring Aldo Ray. My sister Janet and I went to the afternoon matinee. When we returned home, a boy called and asked me for a date to the evening movie. Back to the Majestic we went and I watched “Battle Cry” again, never revealing I had seen it a few hours earlier. That boy has been my husband for 33 years, and we have gone to many movies at he Majestic in those years, but none have been as special as that “first date.” It’s great to know will be preserved for future generations and their “Majestic Memories”.

First of all, I have very many happy memories. Sixty-four years ago, I went to a matinee with my sis Wanda Fout (who is deceased). We went often and so did my parents. Mr. and Mrs. Charles C. Fout. We always walked as we lived on East Main Street. Yes, my first date was at the Majestic, to a matinee, and some other good memories were when some girl friends and I would get together and go sit in the balcony. We all worked at the Mead. We had a ball. My favorite was always Clark Gable. A few years later, the Majestic was always my and my husband’s favorite theater. Early this spring, my granddaughter Angela took me to see the live show of the “Gingerbread Lady.” It will always be my favorite, the Majestic. I will never forget it.

My first visit to the Majestic Theatre was a long time ago, but still a vivid recollection. In 1924, three other girls and myself constituted the eighth-grade graduating class of the little one-room school at Lattaville in Concord Township. As a reward for this accomplishment, the mother of one of the girls took us all to the Majestic to see my first movie, a silent, black and white, entitled “The courtship of Miles Standish.” I have viewed many movies at eh is theater during the ensuing years; romantic, historical and otherwise, but I believe this first one left the most lasting impression.

Among my many memories of the Majestic, one stands out. It was a matinee my 5 year-old daughter, Linda, and I attended. Suddenly, the picture was interrupted. News flashed. Bells rang. (World War II) was over, and peace had been declared.

In the late 30′s Amateur Shows were held periodically to “show off” the local talent. I used to sing and dance on that wonderful stage. Those were the days when prizes were awarded by holding a hand over the contestant’s head and registering the applause. Indeed, it’s a moment to cherish.

I have very fond memories of the Majestic Theatre since that is where I met my husband. As a high school student in 1963, I was working as the candy girl (for 50 cents and hour) when a new doorman/usher cam to work. A short time later, we stated dating. We were married in 1968, had two sons and are still happily married today.

Now, as so many labor for the Majestic, I recall the night I labored in the Majestic. Because I’d “felt funny” all afternoon that Tuesday in 1956, my husband had bundled me off to Dr. Corzine’s office taking advantage of the doctor’s only evening hours. Our long wait there was not in vain. The doctor declared I was in “early labor” and instructed my husband to watch me closely and when I “gritted” my teeth to call him and head for the hospital on Chestnut Street. Full of elation we stepped out of the Second Street office and were greeted by the bright lights of the Majestic next door. We realized the movie’s second showing would soon begin, huddled briefly, checked our pockets for money, then happily and daringly bought tickets and took our seats. The adage “laughter is the best medicine” rang as true for me that night as it does yet today. Young and almost broke, we laughed with Marilyn Monroe and Tom Ewell all the way through “the Seven Year Itch” and I wouldn’t have gritted my teeth if Marilyn herself had commanded me to! As we left the theater, we ran into friends and as I was doing so well my husband invited them to our home near High and Water streets for homemade (and cheap) pizza. Safely there, I managed the crusts but before I could complete the toppings my “water broke” and I began to “grit” like a pro! Panicked and rushing we couldn’t restart our car in the bitter cold and snow. Our friends delightedly played “rescue squad” and by 11:30 p.m. our “party” was in the hospital lobby. Our first child, Michelle, was born at 1:27 a.m. Wednesday, Feb.1. I never did find out who baked the pizza.